In partnership with Pear Anderson, one of the leading Southeast Asian tourism industry intelligence consultancy firms,
this tri-weekly newsflash aims to provide industry partners a greater overview on the changing Covid-19 situation around the region, and to support both travel and hospitality industry stakeholders and travel tech entrepreneurs to drive the recovery and growth of the sector.

Each newsflash discusses 3 recent critical events, delivering insights on the impacts for the respective affected countries and opportunities for digitization and technological advances for stakeholders. 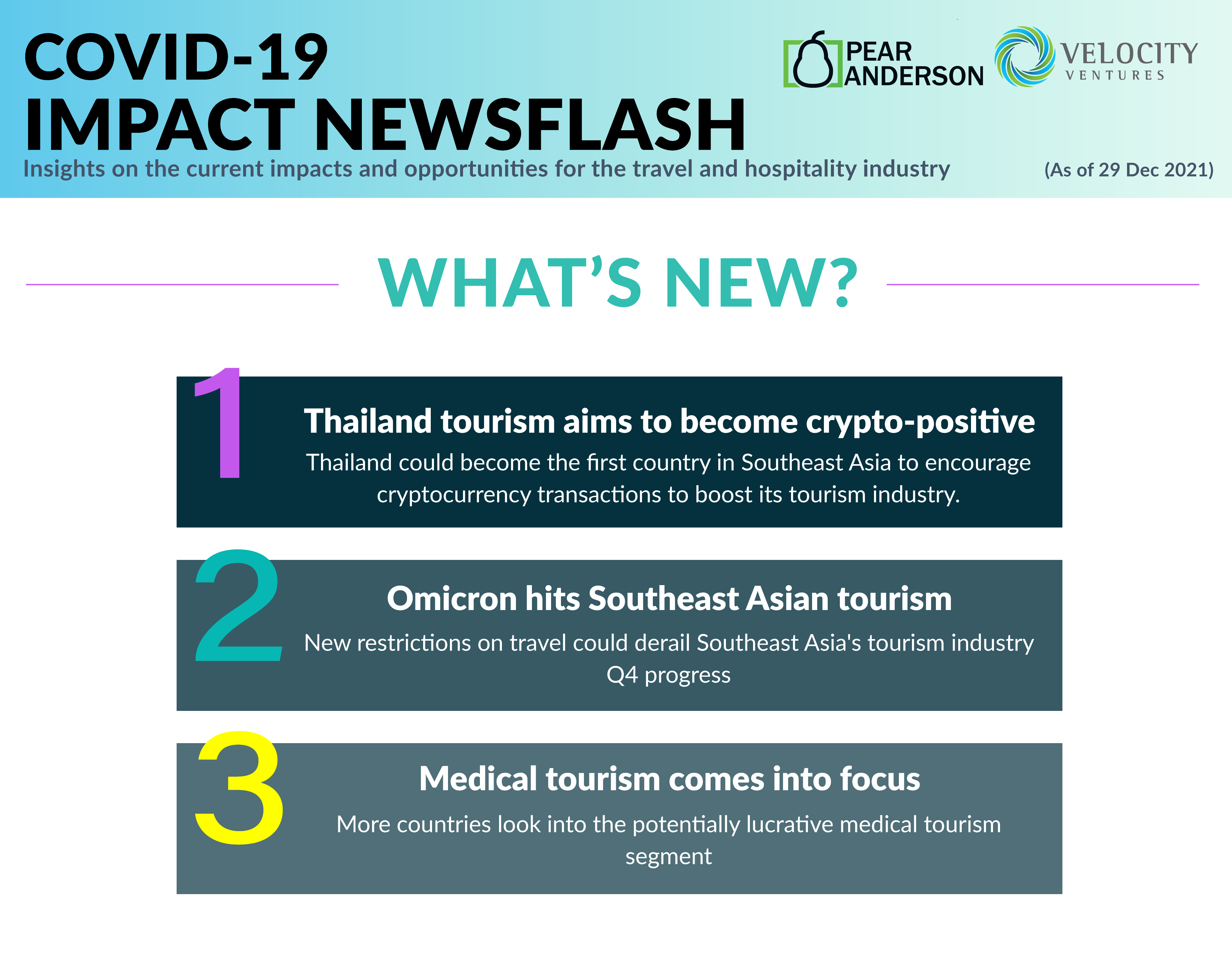 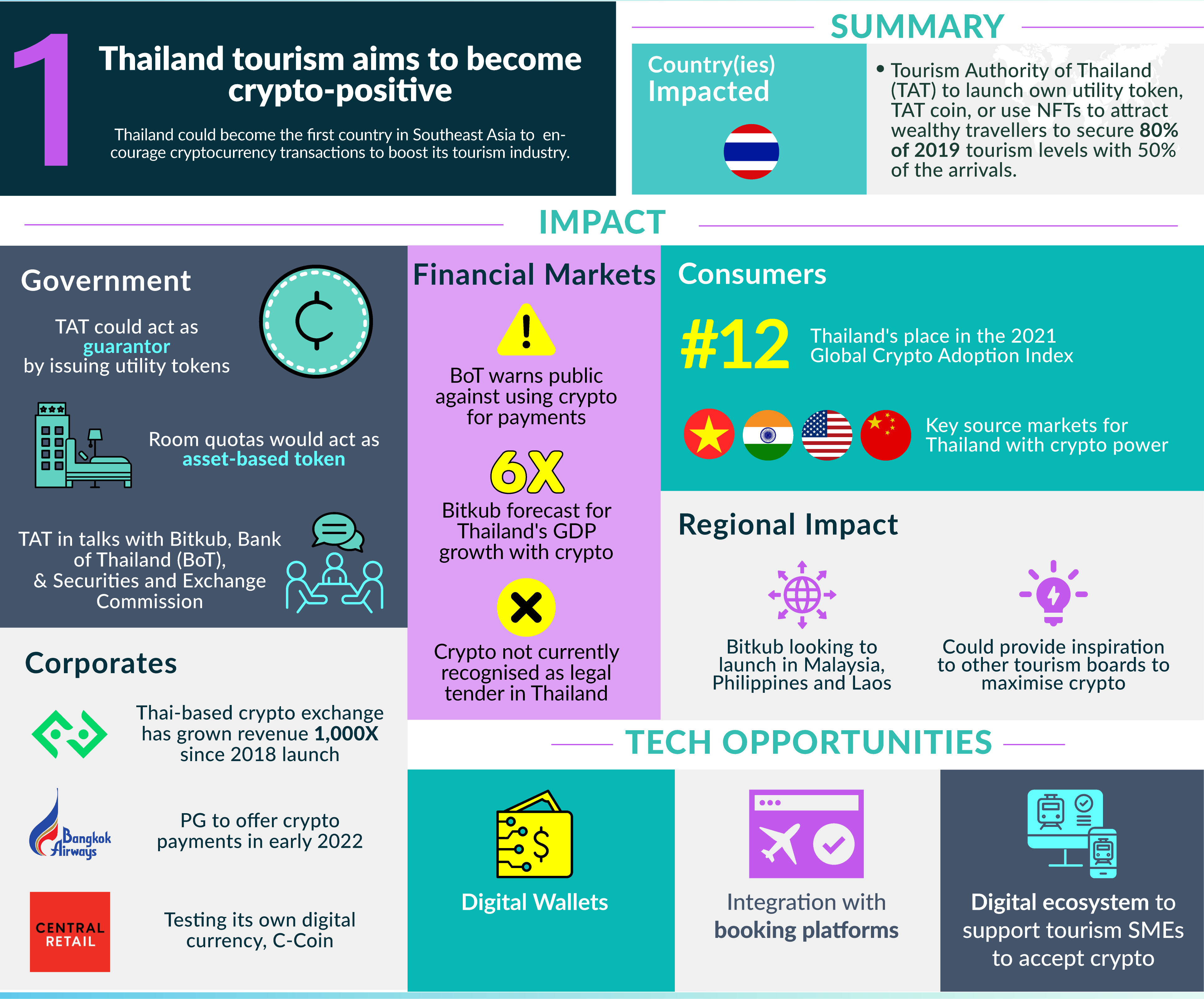 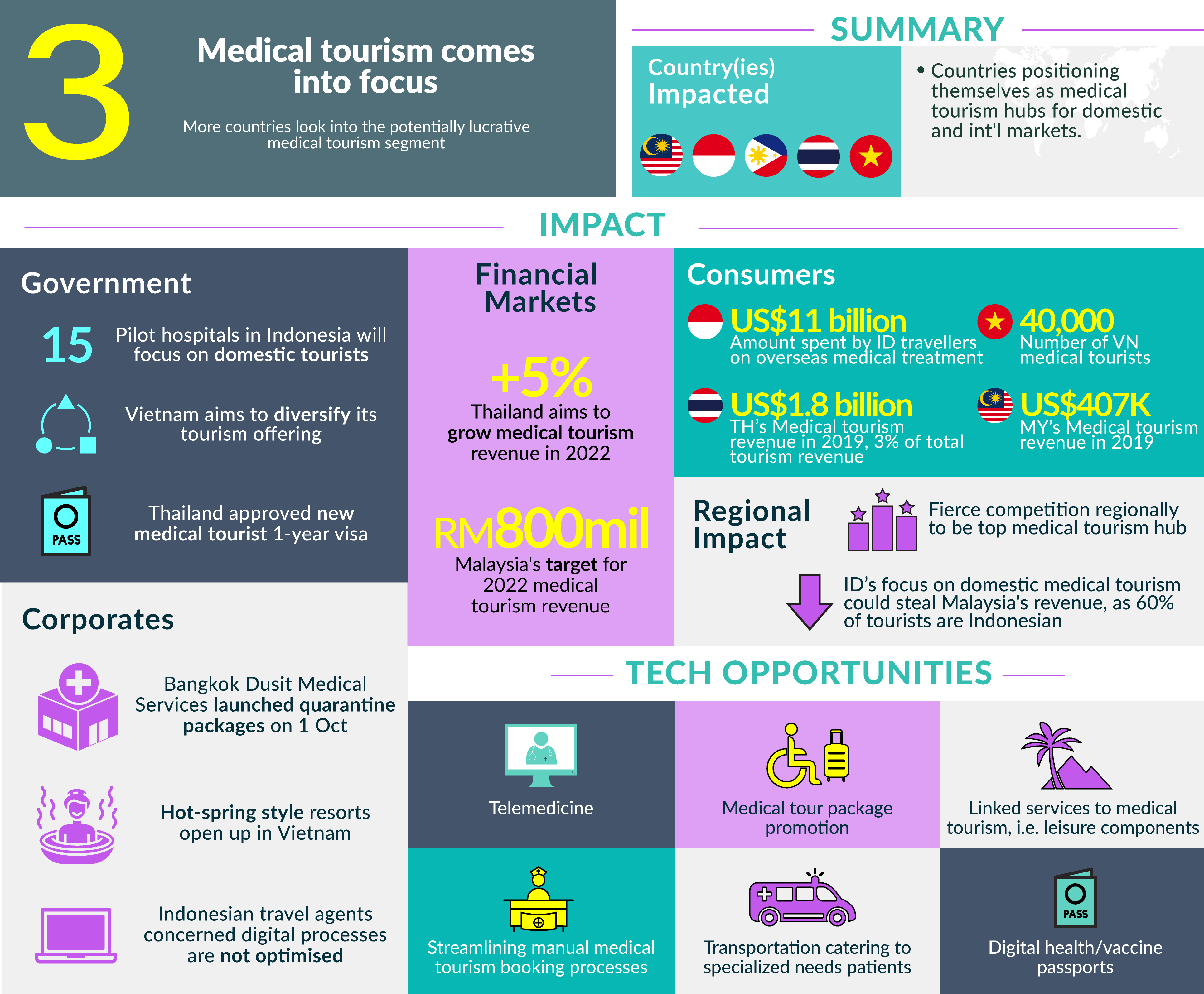 Read on for a detailed summary of each of the event:

A development which has captured media headlines in December is the possible play by the Tourism Authority of Thailand to develop its own utility token, “TAT Coin”, or to use NFTs to position Thailand as a “crypto-positive society”. Its logic is that the only way in which Thailand can regain 80% of its 2019 tourism revenue but with only 50% of the arrivals is through attracting high spending tourists – and they believe that cryptocurrency holders tick that box.

It faces challenges – the Bank of Thailand has recently warned consumers against using cryptocurrency for payments, due to its high volatility. Nevertheless, it is working on a consultation paper on digital assets, which should be released in January 2022, and could shed some light on whether the TAT’s idea could be feasible.

Bitkub, Thailand’s largest cryptocurrency exchange, will likely play a role in this development, with the TAT already naming them as a potential partner, and it partnering with retail group Central Retail, as well as Bangkok Airways.

The Omicron variant currently poses the largest danger to Southeast Asia’s tourism industry – and the economy at large in the region. Imported cases have been detected across the majority of the region, and locally transmitted cases are starting to be reported, too.

Thailand and Singapore have taken the strictest measures for inbound tourism so far, both choosing to suspend new applications for the Test & Go scheme and the Vaccinated Travel Lanes (VTLs) respectively. The implications of these actions could have far-reaching ramifications for regional governments’ confidence to reopen international borders, given the fact that they are seen as leaders in reopening schemes.

Other measures governments have taken include banning travellers from countries where the variant has been detected, increasing quarantine, implementing stricter testing and speeding up booster shots and the vaccination of children. No domestic travel restrictions have been imposed yet, but certainly they could be on the cards.

Medical tourism has always been a core part of Thailand and Malaysia’s international tourist strategy, and now other countries in the region are waking up to its potential.

Indonesia in potential has much to gain from promoting medical tourism to its domestic market – pre-pandemic, it’s estimated that Indonesians spent $11 billion USD on overseas medical treatments, and are one of the key source markets for Malaysia. Now, Indonesia wants to develop 15 pilot hospitals throughout the country, offering common medical treatments. Tourism stakeholders welcome the move, although they question whether Indonesian hospitals’ digital processes are sophisticated enough to cater for the market.

Should Indonesia, the Philippines and Vietnam all jump on the medical tourism bandwagon, there could be fierce competition in the region to attract medical tourists. 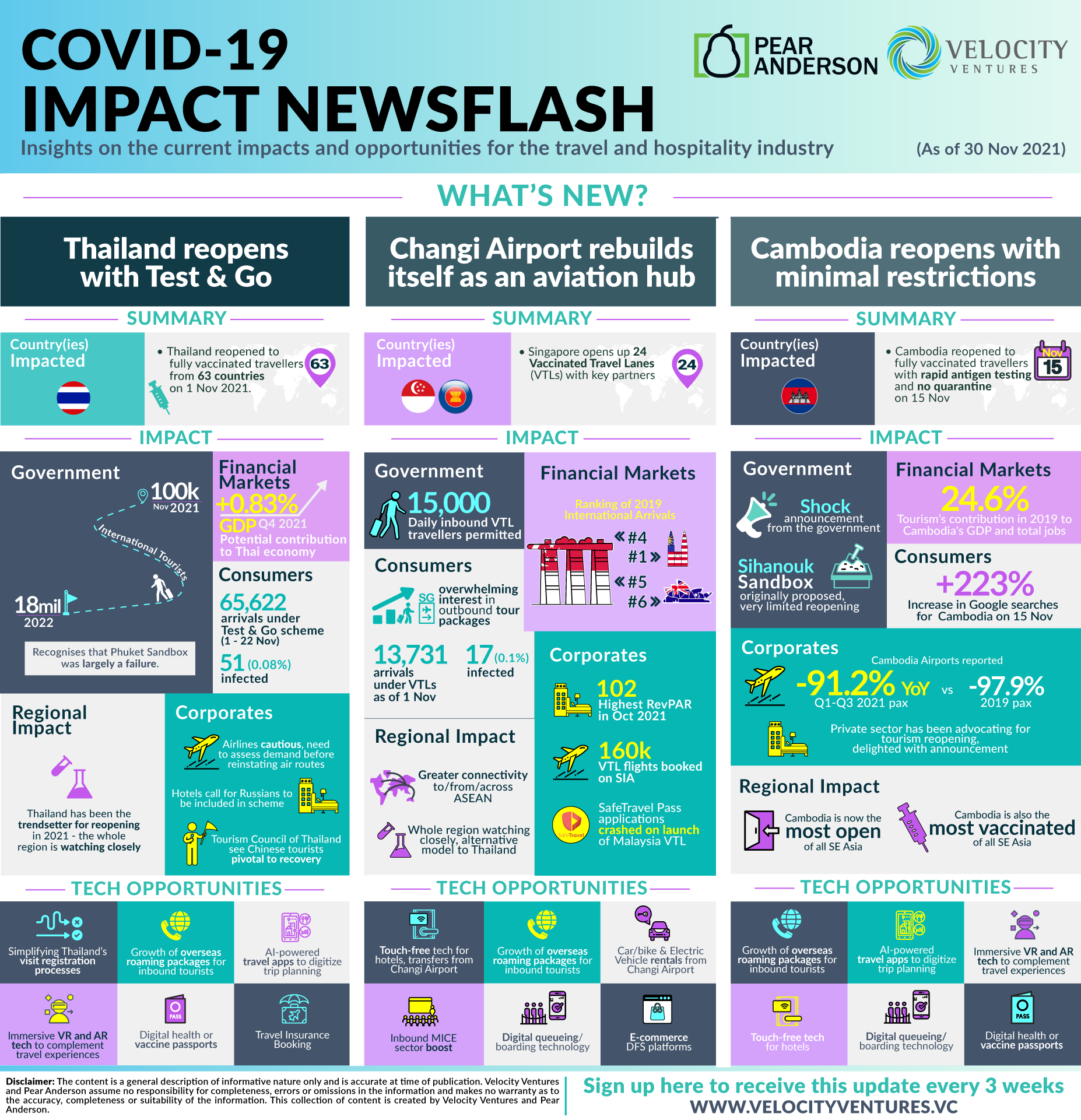 Read on for a detailed summary of each of the event:

Thailand’s launch on 1st November of its Test and Go scheme, giving quarantine-free access to fully vaccinated travellers from 63 countries, was significant – it built on the limited reopening success it had already had through the Phuket Sandbox, but with less cumbersome entry restrictions. With most of Southeast Asia looking at the Sandbox as a viable way of reopening, Test and Go has positioned Thailand as a leader yet again.

The government and Thailand Authority of Tourism (TAT) have high hopes for the reopening scheme, aiming for 100,000 international travellers in November 2021, and an overall target of 18 million by the end of 2022. The University of the Thai Chamber of Commerce sees a boost to the Thai GDP overall in 2021 of 0.83%.

Whilst tourism stakeholders have greeted the reopening enthusiastically, they also remain cautious about the high expectations, after being previously disappointed by the Phuket Sandbox. With Chinese tourists playing such a key role in Thailand’s source markets, many stakeholders do not foresee a return to previous levels until Chinese travellers return.

Encouragingly, the number of infected travellers arriving has been very small – 0.08%, a positive development which should engender confidence in reopening with less restrictions not only for the Thai government and people, but for Southeast Asian countries in general.

Singapore has approached its handling of the pandemic in a “calibrated” manner, and the Vaccinated Travel Lanes (VTLs) scheme has been an extension of this when it comes to the reopening of international borders.

Initially announcing VTLs with Germany and Brunei, it has now expanded the scheme to 24 countries – not all of these VTLs are reciprocal, but the countries where they are reciprocated have seen an enormous interest in outbound travel from Singaporeans.

There has been a limited impact on inbound tourism in Singapore so far, due to the cap on arrivals at Changi Airport, now increased to 15,000 per day. However, Singapore Airlines has reported selling 160,000 tickets so far on VTL flights, and has seen a significant boost to its passenger carriage.

Singapore’s slow-but-steady approach is providing an alternative reopening approach to that of Thailand – and other Southeast Asian countries have already shifted their rhetoric from “sandboxes” to “VTLs”, suggesting that this cautious approach could gain more traction in the region.

Cambodia’s reopening to fully vaccinated travellers from all destinations from the 15 November came as a surprise announcement, even to the travel trade in the country. The government had earlier proposed the Sihanouk Sandbox, which was a very limited reopening of certain areas of the country, and had not been met favourably by tourism stakeholders.

Cambodia is the most vaccinated country in Southeast Asia, and now the most open, requiring simply an antigen test upon arrival, and no cumbersome travel pass applications, like Singapore and Thailand.

The reopening of Cambodia’s borders will have a much smaller impact on its regional neighbours in economic terms. However, by choosing the most open approach to reopening, it will spark fierce competition amongst the region to attract international tourists, and, if virus transmission remains low, it could well inspire other countries with confidence to adopt a more open approach.

If you are the founder of a Hospitality & Travel startup in Southeast Asia, get in touch with us.